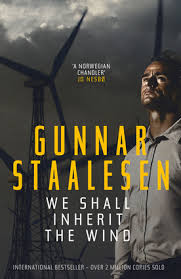 A detective story with an environmental focus set in Norway. Wind farms are not your usual setting for a crime thriller, but these silent monsters can be deadly…

Mons Mæland has been reported missing. His second wife Ranveig is getting very worried. Mons has recently caused controversy by wanting to build a wind farm on his land. But would this be enough to kidnap him or worse?  When a body turns up, the whole affair becomes a lot darker and intriguing. He has been brutally murdered.

Varg Veum is the man,a private detective who comes to the area to investigate the case.He has troubles of his own – his girlfriend is dying in hospital. Flashbacks show how events have led up to this day.

Varg is drawn into a difficult and emotional case. when it is discovered that Mons Mæland’s first wife disappeared several years earlier, the case gets murkier still. she is believed to have drowned, but no body has ever been found.

A dark dark maze of eco terrorism, unsolved mysteries and some shady goings on through the eyes of man they call ‘Lone Wolf’ 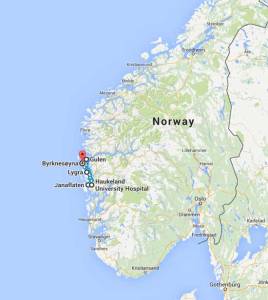 Now before you go searching for Brennøy in Gulen, the author states that you will be disappointed for Brennøy is fictional. Given the subject matter and the story, perhaps understandably. But he says, you don’t have to go far in order to find wind farms in and around Gulen. There is a place called Brennøy in the south of the country but let’s no digress

The trees stood like dark monuments … Above us hung the sky, grey and heavy with rain. Varg and the others arrive ‘ like a cortege’

The missing man ran Mæland Real Estate in Janaflaten industrial estate south of Sotra bridge. Mæland owns land upon which the wind-farm may be built so Mons is an important cog in the wheel. In the 1990s, environmental energy was being developed and was very much a controversial area. Many are against it and passionately so.

“The shipping authorities don’t seem to care much about the environment, when you see what they dump in our waters. Same goes for the utterly ridiculous plans they have for these so- called wind farms of theirs.”

Raw, gritty and isolated from the outside world, Gulen and the surrounding islands – Byrknesoy, Lygra – are harsh, unforgiving places. The man’s children are as equally distant but then a different wind blows in and changes the direction of everything…

This is a landscape where nothing is as it seems, where the land and the energy sources dictate how men live and even more how they behave. Added to that the relgious angle which comes up given the nature in which his body is found and there are some deep dark waters in this part of Norway…

Just how much are people prisoners to their landscape and to financial gain? Is environmental terrorism ever justified?

What words immediately come to mind after reading this book? Dark, chilling, troubling, gripping…? All true but here’s something that not many crime thrillers leave me with and that is the thought provoking angle of what we do to the environment and how we justify this to ourselves.

Wind farms are chilly places at the best of times. (no pun intended) Some call them elegant but I see white, ghost like figures on the remote landscape. A community which looks to exploit their natural habit, to ensure a way of life and to provide for the future is understandable, yet there are a lot of angry people in the book who object – also for environmental reasons.

Varg Veum is definitely a lone wolf in a remote and raw landscape and the way we know from the beginning of he novel , something of what is to come, adds to the overall gripping atmosphere. I found myself shouting out loud at him, like a lamb to the slaughter, having become totally immersed in his fate and investigation.

The issues within the novel are through provoking and real and the whole denouement was a surprise. The small wolf prints inside the novel were a particular nice reminded of the wild and desolate land these pages contained within.