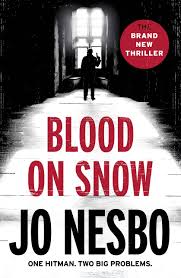 A departure from the norm for Nesbo with Olav, a man tasked with killing a woman he then develops feelings for.

His boss is the major player in Oslo’s prostitution and heroin ‘industries’ and wants Olav to kill his wife. As Olav prepares to research his victim, he gets to know her and finds himself falling for her. Now he wants to protect her rather than anything else – and he knows exactly the danger she is in.

Olav is not your usual fixer. He’s rather sensitive with a dry sense of humour and believes his only talent is killing.

There is snow on the ground in Oslo. There is blood on that snow.

“The snow was dancing like cotton wool in the light of the street lamps.”

Not your usual behaviour of snow in a Jo Nesbo novel. It falls aimlessly to the ground, letting the wind blow it any which way, with the darkness of the Oslo fjord acting as the perfect black backdrop – white against black, a contrast which will acquire a shade of red – blood – later in the book.

Blood on snow reminds him of a King’s robe. His mother loved Norwegian fairytales and kings and is probably why he’s named after one.

The setting here is one of Oslo’s underbelly, the world that Olav inhabits as his boss Hoffman is the crime kingpin of the city. Involved in both prostitution and the drug’s world, he oversees the worst of Oslo society.

Olav is part of that souless and morale free world, enjoying the fact he can kill easily and that’s he’s good at it.

With a world spiralling out of control, Olav and Corina go on the run, but Oslo is not a large city. No place would be big enough to hide when Hoffman is after you. You could try doing a deal with the competition but then who plays by the rules in this game?

Oslo might be snowy, peaceful and calm on the surface, but dig a little deeper and the snow is not white and untouched. Secrets buried will surface and stain at some point..

I’m still reeling from reading this. It’s very graphic and that I know is a Nesbo speciality but still… I found it strange that I was starting to worry and wonder about someone who’s just told me he kills people for a living. A killer with a conscious? I’d never read about a man who killed as he wasn’t good at anything else. A  man with dyslexia and other issues seems hellbent of doing this hideous job. Just when you think he’s human – he does something violent. The novel is short and almost reads like a novella but it does set the scene for a follow up later in the year.

I rattled through this as it’s an accessible read but I’m still shocked by that ending.