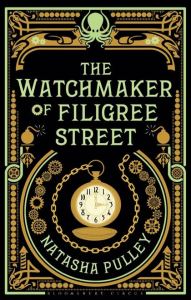 For the most unique of journeys into Victorian England, oriental Japan, academic Oxford and all via a mysterious pocket watch….

Thaniel Steepleton works as a telegraphist at the Home Office. They have just received a bomb threat and so tension at work is high. One evening he returns home to find his tiny dwellings apparently burgled. Cautiously he looks around and all he can find out of place is a gold pocket watch which has appeared on his pillow.

Back at work one day and the watch starts to emit an alarm. Panicked, Steepleton leaves the building only to see Scotland Yard blow up behind him. Feeling that something is very wrong, he goes in search of the watch’s owner, a Japanese immigrant who opens the door of his watchmaker’s store in Filigree Street and to a world of clockwork, music and wonder.

Meanwhile a scientist in Oxford also comes across one of these watches. When she and Thaniel later meet up, their joint curiosity leads them into a world of intrigue.

But danger is just a tick tock away…

This is a journey via London, Japan and Oxford and weaves its way through a story of clockwork, music, and mythical moments.

From the moment the door of the Filigree Street jeweller opens with anticipation, the world opens to a new and exciting world, where a clockwork octopus and the creatures of the watchmaker’s world introduce Steepleton to a new and hidden London.

This London, as well as being a scene of terror with the threat of Irish nationalist  bombings, is awash with new mechanical and electrical inventions, the music of Gilbert and Sullivan and a watchmaker with a secret. Inside the shop are wonders to behold-

Hello? he called into the empty workshop. His voice was spider webbed with racks. Electric lights hummed on as he came in.

Across the wall beside him was a tall pendulum clock, its movement regulated by the joined wings and knees of a golden locust. A mechanical model of the solar system spun in mid-air, bronze birds sat perched on the edge of the desk.

The overall setting from upmarket Knightsbridge area to the Japanese show village and the grim smoke ridden underground really bring the era to life.

Hagi Castle  for example is home to Lord Takahiro and is where English is banned, and “commoners unrelated to or unemployed by the Mori clan were forbidden entry.”

Keita Mori therefore is not just your average watchmaker – he starts his story deep inside the political corridors of Japan where he was once the former assistant to the interior minister of Japan. He is also related to a Samurai lord and always said he planned to move to London where he now creates the finest watches in the city. But are the mechanisms behind them being used for political means?

Keita Mori is a magical marvel – he can remember the future. There are some random events he cab’t predict but his octopus Katsu more than makes up for its with its random gears and sock stealing hobby.

National identity, racism of Asians, japanese living in London, Irish nationalism and a sense of belonging create a world of complex relations. And at the centre, a marvellous sock stealing octopus named Katsu.

You know the feeling that you think you’re going to like a book for one reason but then end up loving it for another reason entirely? A book that suprises and excites you in equal measure? A world where when you close the last page you immediately want to go back and stay there?

This is that book. With such a mix of Japanese culture, history and setting to Victorian clockmaking, this is a book of surprises and then some.

Plot and characters are as vividly evoked as if you were seeing them on screen. Katsu, the mechanical octopus is perhaps one of the most amazing inventions, no characters that I’ve ever come across. Now I know where all those missing socks go..

Mori and Thaniel are like a Japanese- London hybrid of a Sherlock Holmes double act with Katsu as their side kick. The mix of adventure, fantastical elements and a watch which could predict the future was mesmerising.