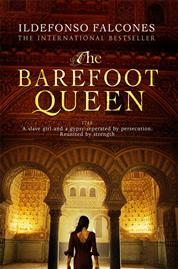 A tale of love, hope and perseverance set against a historical backdrop of slavery and the gypsy community in Spain. There are some graphic scenes of violence against women in this story however which makes the world a very dark one at times.

The year is 1748 and the time is bad, very bad for women everywhere.

Caridad is a former slave who accompanies her master from Cuba. He dies en route but the freedom she gains is an unknown and potentially dangerous things to have at that time, especially as a woman.

Her chance encounter with the gypsies of Seville will teach her more about life and freedom than she ever would have imagined. Milagro Carmona is one such gypsy  -rebellious and forthright – and the two women are instantly inseparable. Milagros introduces Caridad to her community, one which is persecuted and hunted in Spain at the time. And things are about to get worse…

The settings are as varied as the theatres of Madrid, the world of tobacco smuggling and the birth of Flamenco, it is as much an historical fresco as it is a story of love, hope and perseverance. Two very different settings as the story of the two girl’s destinies is played out.

Caridad and Milagros  are two women from opposite ends of the earth, from two very different backgrounds and cultures who become friends in Seville in 1748.

Caridad’s early life has been one of hardship and slavery. Alone in a strange city, she is disillusioned and lost until she meets Milagros. Milagros is a young gypsy girl who understands a sense of feeling lost and alone so despite their differences, their pasts are shared ones and their growing friendship soon supersedes any differences they may have.

Seville is the home for many gypsies like Milagros. Living in the Triana part of the city, life is tough – in the raid on the city and in Triana in particular, close to 130 gypsy families were arrested, the gates of the city closed by the army –

That was when the soldiers finally received direct instructions from their superiors: arrest all gypsies as dangerous and despicable persons, regardless of their gender or age, and confiscate their assets.

This is the Seville where Milagros and now Caridad both live as they struggle to survive in this tumultuous world.

The setting changes to the theatres of Madrid where the two girls later live without the other’s knowledge. MAdrid shines as the location of dreams and hope – theatres dotted all over the city –

There is rivalry between two Madrid theatre: the Principe and the Cruz, which weren’t far from one another. There was a third theatre, the Canos del Peral, where they performed popular lyrical compositions.

The people that liked the Principes theatre were called polacos and those that preferred the cruz were the chorizos. They didn’t only fight each other , but they would also regularly attend the rival theatre to wreck the show and mercilessly boo the comic actors and singers.

The songs of the Sainetes and the tonadillas fill the air as the world of theatre, acting and applause comes alive