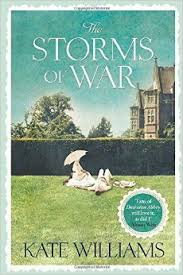 An epic saga of one family’s fortunes across the miles during the Great War and its impact on those who went and those who stayed behind. The first of a trilogy.

Life is good for the de Witt family. German Rudolf and his aristocratic English wife Verena are planning the wedding of their daughter, Emmeline, to a rich and successful man. Eldest son Arthur is in Paris and Michael is studying at Cambridge.

But wars cost dreams and its the whole family and not just  Celia who risks losing it all. So she joins the war effort which takes her on a journey she might never have contemplated otherwise.

The war trenches on the Western Front –

The novel opens with a soldier shivering with fear in a trench. This are the hard facts of war and the reality. but what was his path into getting here? The novel then is a flashback which starts to explain what life was like before the war and who the soldier was…

Germans living in England at the breakout of war –

A German family living in England at the breakout of war – how were they treated and how did they manage to live with what their homeland was doing whilst their friends in their adopted land fled in fear? The De Witt family sees the fear of war from a unique perspective which provides the novel with a new and insightful view of what it was like to live in the lead up and during the war if you were German..

It would be so convenient for the Germans who live in England if there were no war. After all in a conflict, who would they choose?

An English country house in Hampshire-

When the letter comes to the house from the son who has gone to war, there is a sadness and a realisation that this will be no short time away

“Send me a kiss. All the chaps say we will be back in England before you know it, a couple of months, we think”

But time at the house is as yet idyllic and charming. A family who has earned its money from the butchers trade and who now lives comfortably arranging marriages for their daughters. But father Rudolf is a German who is soon suspected  of betraying the one country he has done everything for.

A saga in a family which spreads out over decades and countries leading back to the fortunes of the De Witt Family. The first in a trilogy which is set to explore so many other facets of this time and place.

A long book but one which really looks at a unique perspective of the war – that of a German family living in England and gradually feeling the effects of war from those they have known and worked with for years. As suspicion and fear grow, so too does their dubious status in their community. Where the first part of the novel is the build up to this, the rest is the aftermath of what happens when a family get split up and when one member of the family is accused of spying.

This was a great if not long read but one which showed a new insight into the usual war story. I knew nothing of the German camps in England at the time and the workings of the Asquith government were fascinating. The calmness of the English country home and gardens contrasted well with the raw, dark dankness of the trenches and the impending war.

Pleased this is a trilogy as there were many avenues left open to explore. I shall be back for a another epic read!