Written by Japanese poet and novelist Takashi Hiraide, the book won Japan’s Kiyama Shohei Literary Award, and was a bestseller in France and America.

Story in a nutshell-

A couple in their thirties live in a small rented cottage in a quiet part of Tokyo;  they might work together ( at home as freelancers) they have relatively little to say to one another. The day a cat arrives at their door and into their lives however, things change. Their relationship changes as they accept the cat into their lives and things for a while seem to be going well.

Something however is about to happen.

The book is very Japanese in many ways and not just because it was a major bestseller in Japan or that its writer is of course Japanese. No, this is a book which manages to get snippets of Japanese culture into each and every page – whether it be the people in the book, places or the way that the cat comes into their lives and their homes. One thing is described at a time which is not like books in the West but then this seems to be the Japanese way of contemplating things aand describing things in detail taking time to appreciate them. The owners look to Chibi, the cat and its world to appreciate their own –

Chibi was able to sleep comfortably whenever she wanted.And from then on we got in to the habit of laying out the futon early in the evening so that we too, the human residents, could sleep any time we wanted as well.

The house and guest house as well as the other places where the couple live and the cat wanders are described and evoked so well that you can see what the cat sees. The husband explains that his wife is the cat lover but that he is starting to see things differently too –

“What’s interesting about animals, my wife explained, is that even though a cat may be a cat, in the end, each individual has its own character.

‘For me, Chibi is a friend with whom I share and understanding, and who just happens to have taken on the form of a cat.’”

A short gentle visit to Tokyo and a lyrical magical world where a cat might be the symbol of a life and existence of all of us. If the story doesn’t get you then the cover will! The green glisten of the eyes, that face, the fur that just needs to be stroked and cuddled……

The book is short and compact – that you can just pick up and appreciate in a short time – just like picking up a cat, stroking it and appreciating it before it jumps away, leaving you with the memory of it and the impressions of its paws on your heart. 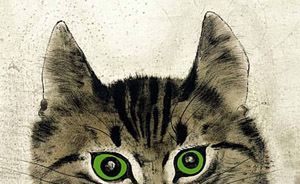