A metro full of Christmas revellers has stopped at a station before its final destination, due to the ‘wrong sort of snow’. Everybody gets off, except an old lady, nicely dressed. Joe Ashworth is on the train that night with his young daughter Jesse – they should be home by now, best phone a  taxi. Jesse goes to the old lady ‘Look that old lady hasn’t moved’

This is a novel where the setting IS one of the leading characters and even though the Mardle of the novel is fictional, it is no less threatening and gloomy –

Mardle wasn’t a place for tourists, even in the summer. There was nothing beyond the fisheries except the harbour, enclosed by the wall. The boats there were dark shadows, half-hidden by the drifting flakes.

It soon became clear that there was lots about Harbour Street that wasn’t attractive – hidden secrets, dark pasts, twisted thoughts and the fact that none of the residents here seem willing to talk.

Why would such  well dressed and elegant lady find herself living in Mardle and more importantly who would want to kill her?

Even Vera thinks that she was ‘more Gosforth than Mardle from her appearance. (Gosforth was one of Newcastle’s posher suburbs.)

Harbour Street is just the kind of  chewy puzzle Vera loves to sink her teeth into – she admits she feels a thrill when she is in Fenwicks of Newcastle shopping and the call comes in telling her a woman has been killed on the metro. But then guilt replaces it as she remembers that everysomeone has a relative or friend that wil be devastated.

More on the setting- http://www.visitnorthumberland.com/ 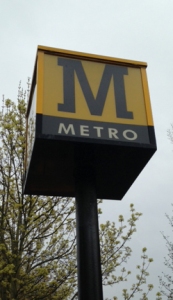 At the end of the street, like a beacon or a square glowing moon, shone the yellow cab with the black M that marked the metro station. This was Harbour Street

Mardle -inspired by Amble when the author wrote the book but only in a logistical sense! Alnmouth – where Harbour Street is filmed. Nothing like Mardle thankfully!

Newcastle was full of people and friendly, they walked arm in arm between the art galleries , crossing the tyne by the Blinking Eye Bridge. or

Special mention has to be made of Newcastle where we meet Vera in an unfamiliar setting – shopping!

So here she was in Fenwick’s department store, sweating because she was still in her outdoor clothes, surrounded by smart and shiny people.

Finally mention should be made of a place central to the plot of the book where Vera goes looking for someone. It is a fantastic place and so well described here. Everyone needs to go here just maybe not on a trail with Vera stomping behind you –

Some library? A visit to a proper place for books to be cherished

The Lit and Phil library?..

It’s where book -lovers hang out’

They climbed the stairs to the library on the first floor and opened the door to s room flooded with light from the glass domes. The walls were made of books

A murder mystery with a meaty puzzle to get your teeth stuck into. Vera at her very best. And a tour of Northumberland and Newcastle, not to mention a starting role for its special place for book lovers.

Harbour that thought when you read Harbour Street.