Book Advent brings  you a rather interesting and unusual treat today – Before reading today’s book, I confess to not having read much Hungarian based literature and certainly had not read much of pre-1914 Hungary. So, two good reasons to include this on the book trail – my first trail in a new country and one that I cannot wait to take you on –

The story is a trilogy and all are included in one volume due to the publishers foresight  – you will want to read the whole lot so why not have them in one amazing volume.

They draw you in to a world of decadence, incredible scenery and well developed characters. Come right this way and join me in a trip to  – 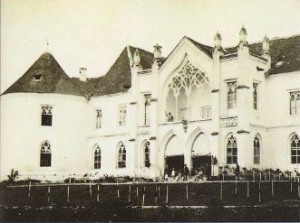 They Were Counted is the story of 2 cousins – Count Balint Abady and Count Laszlo Gyeroffy. As members of the aristocracy, they are priveleged although they take two paths in life – Balint is  a politician and Lazlo becomes a drunkard. Life at the Budapest court may be opulent but behind the dazzling backdrop there are dangers and dark corners lurking….

The awful boldness  of this adventure had unexpectedly  serious consequences

Dazzling  descriptions of the opulence of the Hungarian court immerse you in the sights and sounds and fragrant smells of the time. Oh the music, the music you can hear sing from the pages –

She sang beautifully, with the ease of a well trained voice, which, if not exceptionally powerful, was rich and warm especially in the lower register; and from the moment she started it was clear that she was entirely absorbed by the music

‘These duels are absurd,’ he said. ‘All duels are absurd! What would happen if someone really got angry? All that ceremonial! Such rubbish! Nothing more than games for children. If I wanted to kill someone I would shot them without a word.’

This trilogy is important and particularly interesting due to the fact that the author  himself belonged to a family of note in Hungary – his family castle of Bonchida was partly destroyed by the Germans in 1944. Bonchida appears in the novels disguised as Denestornya.

Everyone mingled together, the richest beside the poorest, the lavish beside the meagre

The books were published in Hungarian between 1934 and 1940 and it is a particular delight that his daughter was one of the translators of his work into English.

These books are a story of two sides of a country, a world so far removed to any we see today and one which not many people will know about. The political scene may have been one of turmoil and the parties opulent but the true story is one of Hungarian society and the Hungarian language both of which can appear isolated and closed off from the rest of the world

With the passing years he became more and more aware of the gulf that divided him from his cousins, of the financial and social differences that set him apart.

Take a trip in an old fashioned carriage and recreate the opulence and the struggle of times gone by.

Your guide is someone who was ideally placed to show you the true face of Hungary and its inner workings.

The clatter of wagons which had become so deafening during the last half-hour, began to die away behind him, leaving only the slight tinkling of the harness bells and the soft hiss of the wheels on the ground.

Written on the cover is the phrase – love, sex, money, power, beauty and the pathos of a society which cannot prevent its own destruction

They were counted is long and turbulent journey into a closed and secret society but it makes for one hell of a thrilling ride.